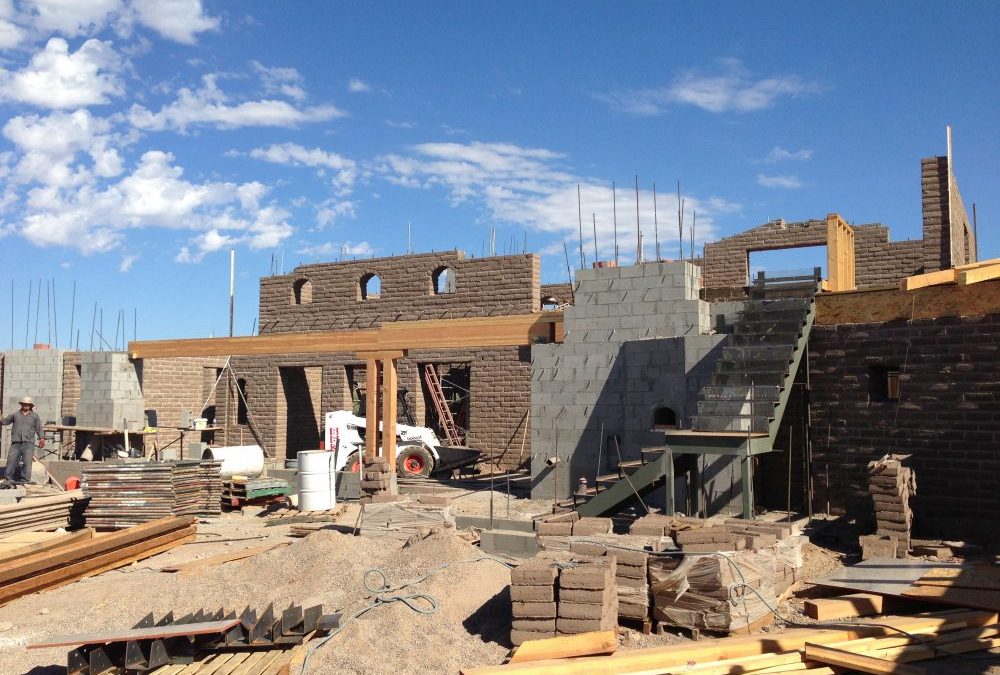 Adobe construction is one of the first building materials used by ancient human beings, and is a good building method in warm, dry climates such as the Southwestern portion of the United States.  Variations of adobe built structures go back thousands of years, and offer the advantage of providing thick massed walls, which help cool the house in the summer and warm it in winter.  New Mexico has wonderful examples of old adobe construction in some of the very old Indian pueblos, and a little “newer” structures, such as the Palace of the Governors, built in the early 17th Century in downtown Santa Fe.

Today, adobe brick construction is an improved and more predictable version of the old mud and water handmade technique, and yet it has changed very little over the centuries.  Bricks are typically 12” thick and are structural in nature.  Therefore, the elements of a home that you would normally build in after framing, such as plumbing and electrical locations, have to be designed and precisely located during the construction of the walls.  Also, because the bricks are naturally geometric, any curved elements to the home, whether arched openings, or radiused walls, require some careful thought.

Choices of finishes for adobe walls are varied, from (a) leaving the natural bricks exposed, to (b) brushing them with a stiff broom (to dislodge the loose mud and give an interesting texture to the bricks, to (c) mortar washing the bricks, which camouflages the mortar joints and evens out the overall appearance of the walls, to (d) plastering over the bricks with total coverage but still keeping the dimensional appearance of the shape of the bricks, to (e) plastering with a thick enough coating of plaster that the contours of the bricks is buried under the plaster.  All are beautiful and interesting in their own way, and a mixture of these techniques can be used in the same home.

A true adobe home will appeal to the person who finds satisfaction in natural, authentic materials and historically based construction methods.  The earthy quality of adobe construction mixes beautifully with reclaimed woods and handmade ceramic tiles, and the juxtaposition of adobe with old carved stone architectural pieces such as fountains and carved fireplace surrounds, works beautifully to put both in their best light.