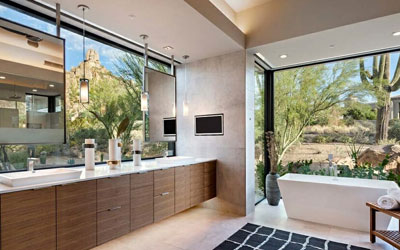 Scottsdale interior designers have mastered the art of blending the arid landscape with sophistication. With their interior design help, homeowners can have a dream home that surpasses even the most luxurious interior. Before making the decision on who is the right choice for your home design, check out our list of the best questions to ask before you hire an interior designer in Scottsdale.

Scottdale may be a desert city, but it’s far from being just dry land. One of the fundamental forces behind modern design, Andrew Floyd Wright, called it home. Wright was an iconic modernist architect who focussed on creating spaces that harmonize humanity with the environment. His most iconic project, Fallingwater, helped shaped modernism as we know it.

Thanks to designers like Wright, young creatives can produce inspiring spaces daily. The Decorilla team is always keeping an eye on rising design talent to work with. Here are our top ten interior designers in Scottsdale, AZ.

Janet Brooks is the lead in this established group of Scottsdale interior designers, and she is involved in the creative process of each project. With the team’s collaborative approach, Janet Brooks Design work to craft spaces from the ground up to fit each client’s lifestyle and personality.

Homes designed by Janet is the perfect blend between contemporary chic and classic grandeur.

The diversity and wealth of knowledge their team has to offer. An architect, builder, interior designer, and landscape architect work together to create the best possible cohesive interior and exterior design.